Over the last few years, social media sites like MySpace, Facebook, Twitter, YouTube and many others have become a part of our everyday lives. We use these sites to share some of the major moments in our lives with our friends and the world. But what happens to those accounts after someone dies? How are they remembered? What should you know about death and social networking?

Facebook is the world’s largest social networking site, with well over a billion active users. With so many people using the site, it is important to know what happens to a user’s acount after their death. First, someone has to report the death of an account member to Facebook. Once certain criteria are met, Facebook will set up a user’s profile as a memorial.  And after the page has been memorialized:

Twitter user profiles are similarly protected like a Facebook page. Nobody will be granted access to the deceased’s account.  Once the request has been submitted and processed, the account can be either deleted or archived on Twitters servers. (Digital Beyond) When an account is archived it will no longer be able to be tweeted from, but all past public tweets will be view-able to the public.

Google has introduced a more proactive stance for final wishes. Google allows you to set up multiple inactive users.  Users that will be notified of their access to your account after a pre-decided number of months that your account has been inactive. 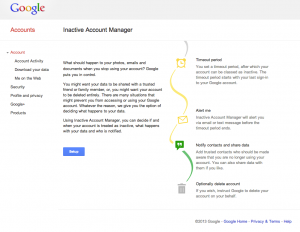 I just set mine up and it was very easy to do. I could set it up to allow certain people to access different services Google+, Gmail, Youtube…  It was somewhat cathartic to create the email she would receive after my account became inactive.

Should your account not be setup for an inactive user, Google has a process similar to the other networks, but it does seem much more stringent. Here is a link to the process.

There are a large number of networks out there i.e. Instagram, MySpace, LinkedIn, tumblr…