People spend a lot of money on funerals and memorial services. National Funeral Directors Association statistics indicate that the average cost of a casketed funeral is about $7,000-8,000, while the more affordable cremation funeral service averages between $2,200-5,400. These are base prices from the funeral home, and don’t include the many additional costs like flowers, catering, and many other memorial add-ons.

And there are many add-ons available, because when a loved one dies their family members want them to be remembered well. For some, that means upgrading everything – the casket, the hearse, the reception centerpiece, etc. – to the premium, high-end version. For others, it means memorably outlandish events like a viking send-off or turning cremated remains into fireworks.

Why do we do this? Even if the deceased specifically asked for the simplest, most basic funeral, we’re always tempted to get the most expensive flowers or add any number of options presented at the funeral home. We feel guilty if we say no, as if the test of our love is how much we’re willing to spend (or go into debt!) on behalf of our departed loved one.

There’s an element of truth in all this. As the famous maxim goes, “Where your treasure is, there your heart will be also.” If we treasure our loved ones, we won’t be misers about using our worldly treasure to honor their memories. So there is a sense in which it is normal, acceptable, and even good to express your love through the things you buy for the funeral.

The Most Famous Funeral of Them All

You can see an example of this in history’s most famous funeral. Two thousand years ago in a middle eastern district of the Roman Empire, a carpenter-turned-teacher caused some controversy in the local religious scene by teaching about a new kingdom. He called it “the kingdom of heaven.” He worked miracles, healing the disabled and calming storms and turning water into wine. He raised a man from the dead. For another one claimed by the grave too soon – a young girl, the first fairy-tale princess – he turned death into a peaceful slumber, and she awoke when her True Love took her by the hand. He fed the hungry, he feasted with the undesirables, he welcomed children.

He also turned traditions upside-down and got on the wrong side of the local religious authorities. He was branded a religious criminal, accused by false witnesses, rushed through a kangaroo court, tortured, and then finally murdered by being nailed to a wooden beam. After hours of literally suffocating agony, Jesus of Nazareth, the Son of God, cried out for his murderers’ forgiveness and with his last breath proclaimed, “It is finished.”

Thus began the world’s most famous funeral. As prophesied hundreds of years earlier by Isaiah, a rich man from Arimathea named Joseph took Jesus’ body, wrapped it in clean linen, and laid it in his own private tomb. Another man of some means, Nicodemus, brought 75 pounds of burial spices which they used in wrapping the body. They laid him in the tomb, rolled a stone in front of it, and that was it.

Jesus was not a rich man, and by all indications his family was far from wealthy. They did not contribute (as far as we know) to the burial expenses. Does that mean they loved him any less? Jesus’ mother was there at his death, and Jesus’ brothers ended up recognizing him as their Lord. Did they need to prove their love through elaborate purchases? Is Jesus’ the most famous funeral in the world because of how lavish it was?

On the other hand, love and respect for Jesus was shown in expensive funeral provisions. A private grave hewn from stone was an expensive gift, reserved for rich men like Joseph of Arimathea. The seventy-five pounds of spices from Nicodemus was also a lavish gift – the average Jewish funeral of the day probably used around 5 lbs of spices. The ancient historian Josephus tells of the famous rabbi Gamaliel’s burial involving 40 lbs of spices, so 75 lbs is rather exorbitant.

One other funeral gift was given, but it was given prior to Jesus’ death. The famous story of the prostitute who anointed Jesus for burial is well-known. This woman, who hardly could have been called rich, used an entire flask of “very costly” ointment and poured it over Jesus’ head. When his disciples objected to what they considered a wasteful gesture, Jesus told them off and expressed his approval by calling it “a beautiful thing.”

So we see three different examples of funeral expenses for this “most famous funeral of them all.” We have the lower-to-middle class family members who can’t afford to spend much, and therefore do not. We have two rich individuals who contribute according to their means (though no doubt there was great sacrifice in each of these two gifts, both financially and in terms of their public reputations in associating with a condemned criminal). And thirdly, we see a poor woman who gives well beyond her means.

What We Can Learn From this Most Famous Funeral

A few thoughts on what we can glean from the death and burial of Jesus:

“I am the resurrection and the life. Whoever believes in me, though he die, yet shall he live, and everyone who lives and believes in me shall never die. Do you believe this?” 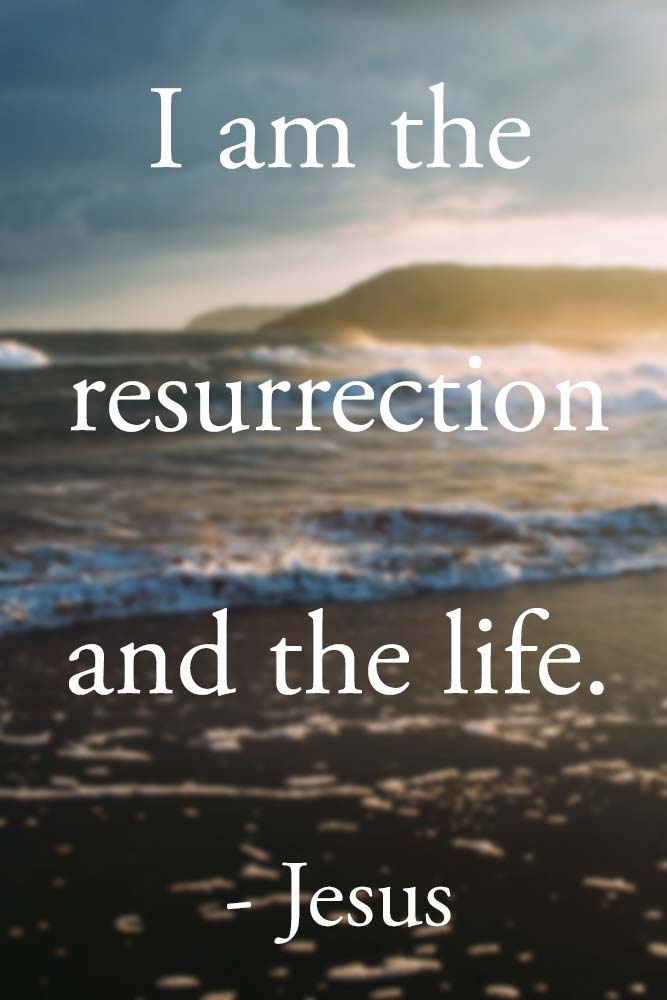