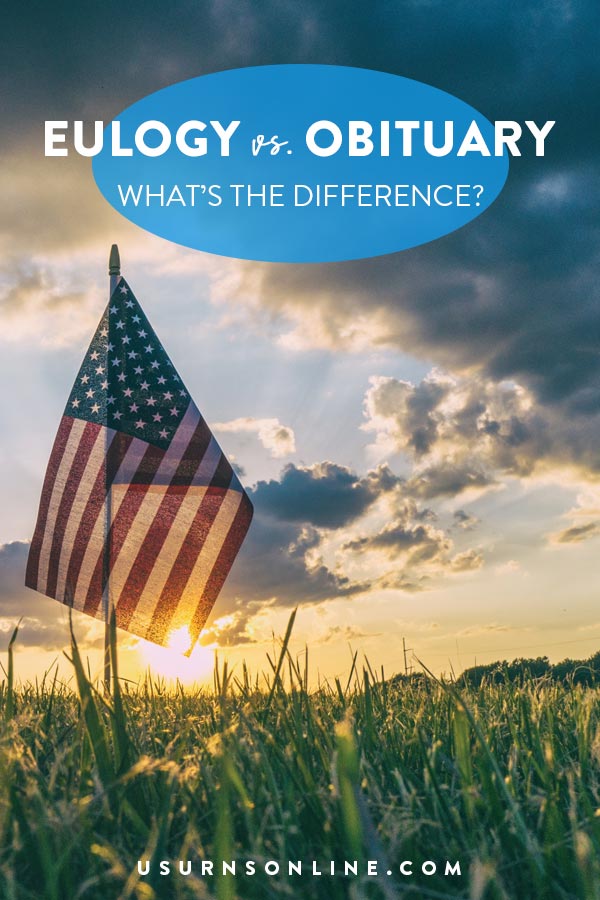 Eulogy vs obituary… which should you use, and what do they mean? If you are unsure, you may have used either word incorrectly. Maybe you even thought they meant the same thing, and so used them interchangeably.

Well, rest assured you are definitely not the only one who has! Read on to learn more about the differences between a eulogy and an obituary.

Simply put, a eulogy is a speech usually delivered at funerals and in honor or memory of the person who has passed away. In contrast, an obituary is an announcement of death customarily printed in a newspaper.

While closely related, these two words have entirely different denotations, as well as etymologies. Let’s dig a little deeper.

First, we’ll take a look at the history of each word. Next, we’ll check out the etymology and common usage. Lastly, we’ll reiterate and clarify the difference between the two words by giving you an easy mnemonic device to help you remember.

Eulogy (n.) – a speech in praise or memory of someone, usually given at funerals.

The difference: A eulogy is spoken or read publicly at a funeral or memorial service, while an obituary is printed in the newspaper or online.

The term eulogy is from the Greek eulogia and is translated in modern English to mean something along the lines of “praise” or “true words.”

Affected by the Latin elogium (“inscription on a tomb”), eulogia eventually came into existence as the English word elegy in the late 1500s. Today, the word elegy is still a fairly common term which describes a poem, usually sad, about a beloved someone who has passed away. But it was a very popular form of expression among the Greeks and Romans during the medieval era.

Elegies continued in popularity right up through the 1800s, and found common usage among English writers, including Katherine Philips (“Epitaph” in 1654), Thomas Gray (“Elegy Written In a Country Churchyard” in 1750), and Alfred, Lord Tennyson (“In Memorium A.H.H.” in 1849). As most funeral services eventually began to drift out of the home and into the funeral parlor, the elegy has given way to the eulogy (in “praise” of the person who has passed).

“Wait!” you may think. “If a eulogy is a speech simply given in praise of someone, does that mean a eulogy can be given for someone who is still living?” Well, the short answer is yes.

The word eulogy actually only has connotations of funeral service, and while that is mainly where eulogies are spoken, it is not a strict rule by any means. Eulogies may be spoken at a retirement party, graduations, or even in honor of a birthday…but with that being said, those “eulogies” are typically called a toast or just simply a speech.

Obituary (n.) – a short biography of a person who has passed away, usually published in a newspaper and providing details of the upcoming funeral services.

The difference: Obituaries are written and published, while eulogies are spoken.

Now, on to the word obituary. First transcribed in English in the early 1700s, obituary also has its roots in Latin. To be precise, it comes from the Medieval Latin obitarius (a record of the death of a person), the Latin obitus (departure or death), and the verb obire (to go toward).

There are early records of the word obituary, transcribed specifically in 1706 as a “register of deaths,” and again in 1738 as a “record or announcement of death, especially in a newspaper, and including a brief biographical sketch.”

These days, the word obituary simply means an announcement of a death, usually in a newspaper. It can include a short biography of the person who has died, as well as details about the funeral service, but the length often depends on the space within the section of paper that has been allotted or paid for.

It used to be that obits were how most people in a community, particularly a close-knit community, found out about the passing of a friend or even a distant relative. It was how they knew when and where the funeral was to be held.

In modern times, however, when someone passes away, the news is usually shared quickly — if not immediately — on social media. While some communities (especially small towns) still make use of physical newspapers, and while there are still obituaries printed in the classifieds, some people worry that they (and not to mention newspapers as a whole) will soon be made obsolete due to social media.

Eulogy vs Obituary: An Easy Mnemonic

If definitions and etymology are not your thing (and there is a good chance they are not!), let us make it easier for you to remember the differences between eulogy and obituary with this simple mnemonic device:

Whenever you think of the term eulogy, think of a speech given by you-logy for someone you love.

See what we did there?

And whenever you think of the terms obituary or obit, think of the similar-in-sound word omit…as in, the newspapers that carry classified obits may soon find themselves outdated and therefore omitted from modern society.

There, not so bad, right?

We hope that this article has helped you to understand, at least a little bit, the main differences between eulogies versus obits, as well as where the words themselves actually come from.

Have you come here because you need to write a eulogy, but you don’t know anything about it? Have you been tasked with giving the eulogy at a service for your loved one, but don’t know where to begin?

If so, you might be glad to know that you can get professional assistance writing the eulogy. We have an experienced eulogy writer standing by right now to provide you with the quality eulogy you are looking for. Find out more here.

We also have a free and comprehensive guide on how to write a eulogy. Check it out for tips, eulogy examples, outlines, quotes, and a step-by-step guide to writing the perfect eulogy.