So, you like riddles, eh? Here are three of our favorite riddles about funerals, death, and cemeteries that will stump you for sure. Answers to each riddle follow; once you get the answer to each riddle, pass them on to your friends!

Two vehicles were involved in an accident in the middle of town. The man who was driving a little green car had overtaken a big black car. The driver of the green car had misjudged the distance between him and the on-coming traffic and had to swerve back in, causing the black car to swerve and crash into a shop window.

A woman, while at the funeral of her own mother, met a guy whom she did not know. She thought this guy was amazing. She believed him to be her dream guy so much, that she fell in love with him right there, but never asked for his number and could not find him. A few days later she killed her sister.

What is her motive for killing her sister? 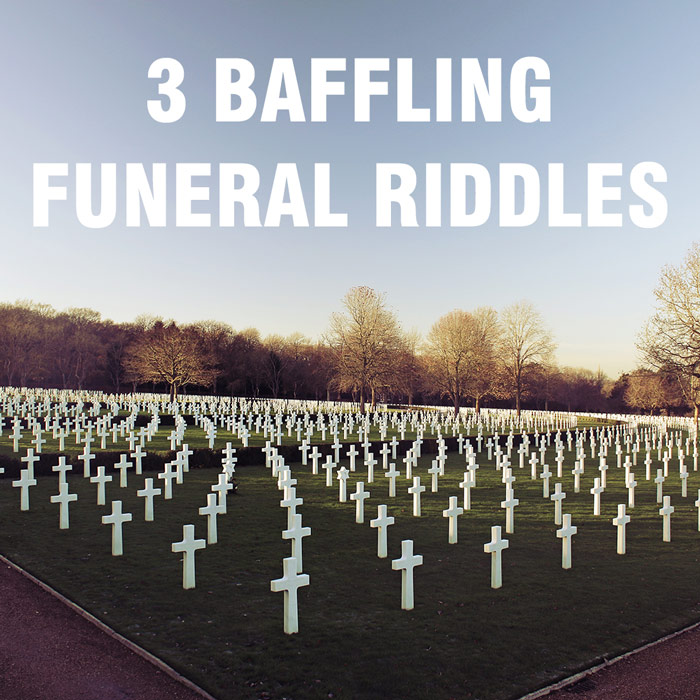 The black car was a hearse on its way to a funeral.

The woman reasoned that if the guy appeared at her mother’s funeral, then he might appear another family funeral.

There is a legend about this riddle, that it was developed by “a famous psychologist” to help decipher whether someone is a psychopath or sociapath. The reasoning is, the answer is so twisted that to guess correctly, one must be a sociopath. However, Snopes has a write-up about this riddle that sounds more plausible. Here is the gist of it:

… just because someone is crazy doesn’t mean he’s also stupid. Psychopaths (also known as sociopaths) possess the same problem-solving skills that the rest of us do, and some of them have been found to be remarkably brilliant (Ted Bundy, for example).

The assumption that all sociopaths approach problems with a “Whom can I kill to solve this?” mentality (and that sociopaths believe everyone else thinks this way as well) is an erroneous assumption based upon a false stereotype. Most sociopaths would find this question as illogical as the rest of us and ponder a whole range of other possibilities (e.g., why didn’t the girl strike up a conversation with the man at the funeral, examine the condolence book afterwards, or ask her sister about him?), and rather than just blurting out the purported “typical” response, many of them would provide answers just as mainstream as those offered by us “normal” folks (e.g., one sister thought the other was involved with the mystery man and killed her sibling over an imagined romantic rivalry).