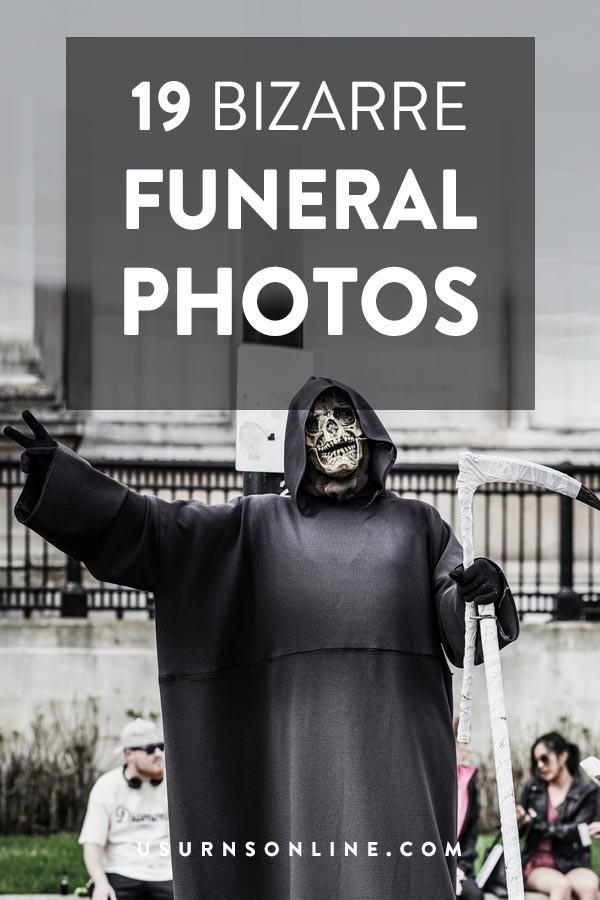 Really, anything having to do with death is bizarre. When there is a death, there’s sadness, humor, peace, bitterness, pragmatism, expensive fees, cheapskates, tradition, alternative contemplation, memories, and individuality.

Trying to disturb the evidence as little as possible. Image shows a coffin shaped like a crime scene chalk outline.

But why is Roberts’ name so small? This bizarre pic shows a funeral home sign that reads, “Bury & Roberts Funeral Home.”

Billboard reads, “This year thousands of men will die from stubbornness.” And someone went and added via spray paint, “No we won’t.” You have to wonder who is reporting these statistics.

Not really sure what to say about this one. It’s a sarcophagus adorned with a statue of a reclining man, gazing at the face of another man’s (decapitated) head which he holds in his hands. Makes me wonder who commissioned that.

What a downer. This old newspaper add reads, “If you had no idea what to get her for Valentine’s Day… Imagine how overwhelming arranging her funeral would be. Give her the perfect gift, make pre-arrangements as a couple with the affordable funeral home. Choose from affordable funeral services or affordable cremations. Compassion is our passion.”

This pic shows an old ugly hearse advertising “Budget Burials: Cheaper & Deeper!!” When you’re on a budget, I guess you don’t care if the hearse is pink.

7. THIS COFFIN RACE IS A REAL THING AND IT’S AWESOME

Things get a little crazy at the Day of the Dead Festival in Denton, Texas. This image shows a super-creepy clown mask driver getting ready to race in the annual coffin race. Yep, that’s a thing.

A social media user, somewhere, asks what flavor is depicted in this image of an ice cream cone filled with a dark substance. Another users responds: “death.”

Shepherd of the Hills, laying it on thick with their bad church sign, “Don’t wait for 6 strong men to bring you to church.” They helpfully list their service times, too.

10. THIS SIGN INVITES YOU ON A JOURNEY OF DISCOVERY

This funeral-adjacent sign reads, “Is there life after death? Trespass here and find out.” Choose your own adventure, indeed.

12. THIS CORAL REEF MADE TO HOLD CREMATED ASHES

This is a real thing.

13. THESE CREEPY SITH LORDS AT A CEMETERY IN SALZBURG

Yes, this photo is of creepy Sith Lord statues in a cemetery. Or maybe they’re just Jawas.

15. THIS COFFIN OF A GUY WHO LOVED HIM SOME BBQ

This weird funeral coffin pic shows a guy in a casket that looks exactly like a bbq grill. Also: You’ll never guess what they served at the reception.

Long before Instagram, this weird Victorian-era photography trend was all the rage. This pic shows a guy (who is deceased) holding a baby (also deceased).

17. THIS AWESOME HEARSE STRAIGHT OUT OF THE MAD MAX UNIVERSE

It’s literally a photo of a hearse from Mad Max. Insurance on that must be a nightmare.

18. THIS FIELD OF CASKETS

If you build it, they will come….

19. THESE CASKETS UNEARTHED BY THE GEORGIA FLOOD OF 1994

Floating caskets popping up all over like it’s 1994. This is an image from the Georgia flood of 1994, which washed away part of a cemetery and cause caskets to float around town.

What People Are Dying to Know About the Death Cafe
The Millennial's Guide to Killing Funerals
Here's the complete list of everything you can do with your body after you die
Comedian Dave Allen on Death & Irish Funeral Traditions
20 Hilarious Funeral Humor Memes
Movies About Death, Dying, & Grief
Category: Oddbits
Leave a Reply Cancel reply
Search Resources & Articles
Featured Cremation Urns