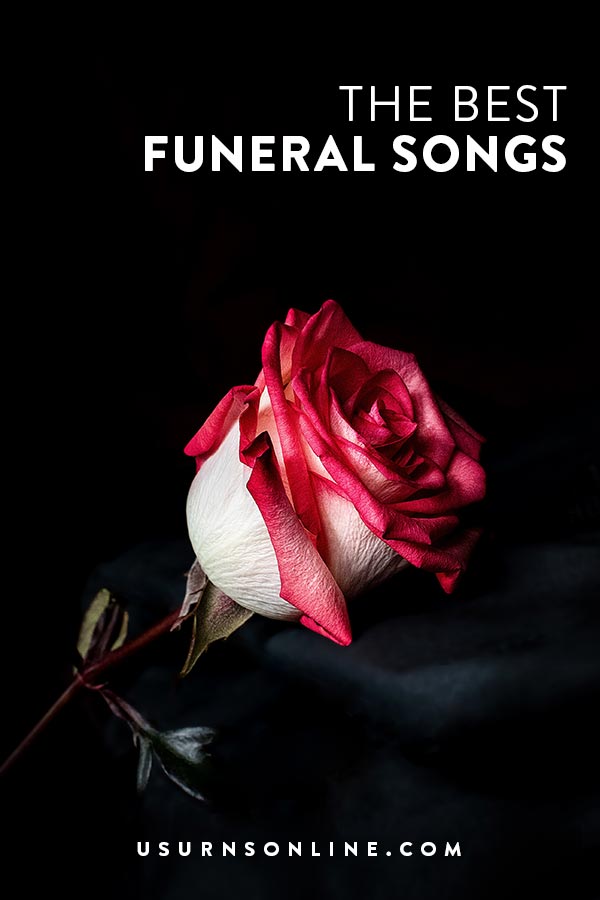 Music touches us at a very deep, intimate, and basic level. So choosing the funeral songs for a loved one’s service can be a daunting and emotional task. Which song, or songs, to choose? Is a particular song appropriate? What is the best funeral song for dad, or for a country music enthusiast, or for an evangelical Christian?

Since each person is unique, we can’t make those decisions for you. However, we can point out some of the most popular and appropriate songs for funerals in a variety of genres and styles.

Below, you’ll find more than 100 of the most popular funeral songs of all time. We have a “top ten” list, songs listed by genre and person, and helpful guidance in the form of funeral song FAQs.

These funeral songs cover every person, theme, and genre. We start with your go-to list of the 10 most popular funeral songs of all time, plus a broad list of 100 more songs for you to browse through. Then we list the top 5 or so by person (dad, grandma, spouse, etc), theme (uplifting, sad, funny, etc), and genre (rock, country, traditional, and so on).

Here is the outline of our ultimate list of funeral songs:

These are the most popular song choices for funerals, memorial service, and life celebrations. Pulling works across all genres and styles, these are simply some of the most emotionally resonant songs every written.

Next we have a list of 100 more popular funeral songs, listed alphabetically. These are songs for all types and tastes. Read further for funeral songs sorted by genre, person (dad, mom, spouse, etc), and style.

Most Popular Funeral Songs by Person

Below you’ll find funeral songs for dad, mom, grandma, grandpa, spouse, and child. These are songs written with that person in mind, and can be a helpful way to express your love for a special and beloved person in your life.

Check out a full list of the 21 Best Funeral Songs for Dad.

See more funeral songs fitting for a mother in our article on the 21 Best Funeral Songs for Mom.

Here is our list of the 21 Best Funeral Songs for Grandpa.

Funeral Songs for a Child

Most Popular Funeral Songs by Theme

Listing popular funeral songs by theme or mood can be somewhat subjective. Hopefully these uplifting, happy, sad, and funny funeral songs help you choose the perfect music for the service.

We also list the worst funeral songs you could possibly choose below, towards the end of the article. If you have a quirky or morbid sense of humor you will get a kick out of those “suggestions.”

Most Popular Funeral Songs by Genre

These are just a handful of the top funeral songs from several popular music genres. Whether your loved one was into country, jazz, rock, or classical, you’ll find a meaningful and appropriate song to play at the funeral here.

If you need more country music suggestions, here are our picks for the 21 Best Country Funeral Songs.

Do people play music at funerals?

Often, yes, people play music at funerals. This can be religious hymns sung by all, a favorite or meaningful song played over a slideshow, or instrumental music during a time of contemplation.

What are funeral songs called?

Funerals songs have traditionally been called a “dirge,” which is “a funeral song or tune, or one expressing mourning in commemoration of the dead.” (Definition from The Free Dictionary)

Another term for a funeral song is “elegy,” which refers to “a mournful, melancholy, or plaintive poem, especially a funeral song or a lament for the dead.” (Definition from Dictionary.com)

When should songs be played at a funeral?

The answer to this question will be determined by the type and tone of the funeral service. Many religious services have music played or sung during incoming and outgoing processions as well as at other points during the liturgy. For non-religious services, you can choose to play instrumental music or favorite songs during the procession times.

Some families choose to play a funeral song during a time of reflection of prayer. You can also select music to be played along with a slideshow. These elements are typically done either just before or just after the eulogy.

How many songs are played at a funeral?

For a religious funeral, there will often be 1-3 songs or hymns sung by the congregation during the service.

So, in total, most services feature 2-5 funeral songs played during the service itself plus 30 minutes worth of music before and after.

What if their favorite song isn’t appropriate for a funeral?

Funerals are important occasions, and should have a sense of weightiness and significance. So while bits of humor can be appropriate in small doses, an entire song that doesn’t fit the “mood” of a funeral can be a bit awkward.

In that case, we would suggest having their favorite songs play during the reception, which is typically a little more casual. You can pause the reception to announce that the individual’s favorite song is about to be played, perhaps over a slideshow of pictures.

How Long After Death is a Funeral Held?
DIY Funeral and Memorial Service Favors
14 Questions to Ask When Considering Cremation
21 Best Funeral Songs for Grandma
Funeral Resources: A Compendium of Links and Articles
What is the difference between a funeral and a memorial service?
Categories: Funeral Resources, Memorials
Tag: funeral songs
Leave a Reply Cancel reply
Search Resources & Articles
Featured Cremation Urns