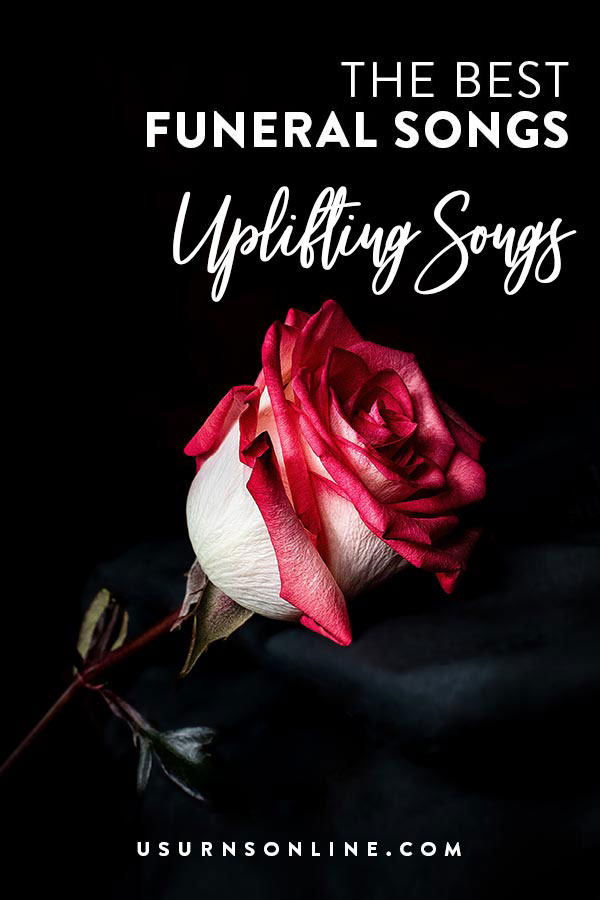 The 21 Most Uplifting Funeral Songs is part of our series on the best songs for funerals. Read the main article here. In that article you will find a list of the top 100 funeral songs, music sorted by genre, and much more.

When you lose someone you love very much, your heart is broken. It seems as if there is nothing in this world that could possibly lift your spirits when you are grieving. But music has a way of doing just that! Sometimes all it takes is finding the right songs.

Are you looking for an uplifting song to play at the funeral of your loved one? If you and your family would be blessed to hear a happy, upbeat song rather than a sorrowful one, then check out the list below.

We have compiled 21 uplifting funeral songs to help you honor your loved one in a positive light. These tunes will also help you to remember that this is not goodbye, but rather just “see you later.”

From golden oldies to contemporary Christian songs, there is a little bit of something here for everyone.

Here are our picks for the most uplifting funeral songs, alphabetized by title.

Marvin Gaye and Tammi Terrell recorded Ain’t No Mountain High Enough in 1867. Recognized by those of all ages, it makes it to our list of most uplifting funeral songs for its upbeat ambiance, cheerfulness, and timelessness.

Serving as a reminder that not even death can end love, Ain’t No Mountain High Enough leaves its listeners with a sense of joyfulness and hope for the future, even as they prepare to say goodbye to their loved one.

The late Christian artist Rich Mullins wrote this moving song in 1988. Awesome God was featured on his album “Winds of Heaven, Stuff of Earth,” and quickly became a chart-topper.

Since its release, you will still often hear it at church worship services and funeral services alike, due to its uplifting nature and reminder of the Almighty.

Irish rock band U2 recorded Beautiful Day in 2000. This song is definitely not your usual funeral song, but its uplifting words and inspiring vibe earn it a spot on our list.

The lyrics remind us not to take anything for granted, even though life’s not always easy. There is always something beautiful to be found in each day!

Who doesn’t love a good Disney song? Especially for the somber occasion of a funeral, Circle of Life from 1994’s “The Lion King” cannot be overlooked.

Elton John composed this song, and he sings his own version of it. But you can also choose Carmen Twillie’s rendition, which is featured in the opening scene of the movie.

This song is suitable to be played at a child’s funeral or an adult’s.

Rock band Styx wrote Come Sail Away in 1977 and released it on their album “The Grand Illusion.” The song is extremely recognizable and is now one of the band’s greatest hits.

Come Sail Away describes better things beyond this life, as well as the journey of finding them, making it a perfectly uplifting song fit for a funeral.

Singer and songwriter Bob Dylan first wrote Forever Young in 1973, but Rod Stewart’s 1988 version is arguably the most recognizable. It landed a spot in the Billboard Hot 100 as a Top 20 hit, and has remained a favorite by music lovers of all generations.

The lyrics are about having someone’s back no matter how much time has passed, and no matter where the road may take them. Pick Forever Young for the funeral service of your loved one if they were a Rod Stewart fan or grew up during the 70’s or 80’s.

Besides the beautiful lyrics and the meaning behind them, Mariah Carey’s dynamic vocals are the main attraction in her 1993 hit song Hero.

Carey sings about finding the hero that is within each of us. That is, the inner strength we can lean on whenever we are faced with a difficult or sorrowful event, like the passing of a loved one.

Elvis Presley was past the vigor of his youth and well into his prime when he recorded this soulful melody in 1974. In If That Isn’t Love, Elvis sings about the life of Christ. The song illustrates the great example of love set by God when He sent His only Son to save the world.

This uplifting song may be perfect for any Christian’s funeral. To know that the ultimate Love now surrounds your loved one, where death is no more… this old tune serves as a wonderful reminder of that.

With the release of the film “O Brother, Where Art Thou?” in 2000 came this cover of the classic Christian hymn I’ll Fly Away. Sung by Allison Krauss and Gillian Welch, this twangy rendition remains true to the original lyrics.

American composer Albert E. Brumley wrote I’ll Fly Away in 1929. This song reminds us that, as Christians, we have more to look forward to than anything this life has to offer.

Whenever you are missing the one who is gone, just look around you to be reminded of them. This is the message behind country music group Lonestar’s hit I’m Already There.

This song doesn’t necessarily imply that someone has passed away, but it is about someone who is very loved yet also very far from home. The lyrics bring a sense of peace and comfort in knowing that goodbye is not for good.

Bill Medley and Jennifer Warnes perform this classic track, which is featured in the iconic 1987 movie “Dirty Dancing.” As you remember all the good times that you had with your loved one, I’ve Had the Time of My Life will bring a bit of comfort (and maybe even a smile)… earning it a spot in our list of 21 best uplifting funeral songs.

With its romantic undertones, this song may be especially meaningful to someone who has lost a spouse.

The peaceful harmony of the piano and guitar paints the background of this pretty song by British singer Cat Stevens. Morning Has Broken conjures up images of peaceful mornings and new beginnings, making it a popular uplifting song choice for funerals.

Eleanor Farjeon originally penned Morning Has Broken as a hymn in 1931.

Christian artist Nicole C. Mullen performs My Redeemer Lives as a powerful worship ballad. The song starts off soft and slow, but ends with all the power of born-again joy. As the song suggests, you can expect to find hope anew in tomorrow, even though grief may engulf you now.

This golden oldie is one of the most uplifting tracks to make it to our list of most uplifting funeral songs. Featuring the unmistakable vocals of the legendary Frank Sinatra, My Way is the story of someone who has arrived at the end of his life. He assures his loved ones that he lived his life just how he intended to. He worries about and regrets nothing worth agonizing over.

Michael W. Smith released Never Been Unloved in 1998 as the fourth track on his studio album “Live The Life.” Smith’s soft vocals are the perfect accompaniment to this song, which is sweet and honest at the same time.

The poetic lyrics to Never Been Unloved serve as a reassurance that, while we may falter and stumble through life, the love that God has for His children is never-ending. God delighted in your loved one, no matter what they did or experienced in life.

16. Somewhere Over the Rainbow by Israel Kamakawiwo’ole (1990)

Judy Garland may have popularized Somewhere Over the Rainbow in the film “The Wizard of Oz.” But native Hawaiian singer Israel Kamakawiwo’ole breathed new life into it with his beautiful 1990 version.

For a song that is both reverent to the deceased, yet uplifting at the same time, Iz’s Somewhere Over the Rainbow is the way to go.

Many of the songs on this list are quite upbeat. If that’s not what you are looking for, but you would still like something uplifting, take a listen to John Denver’s 1971 classic Sunshine on My Shoulders.

The lyrics are simple and sweet, reminding us of all the wonderful memories we have to cherish of the person who is no longer with us.

Gospel singer Deitrick Haddon delivers the message of Matthew 25:21 in true R&B style. As enjoyable as it is reassuring to the weary soul, Well Done encourages us to stick with the straight and narrow.

It tells us to remember our purpose, and staying faithful to that purpose will lead to a warm welcome in heaven when our time here on earth is over.

As this list is hopefully proving, not all funeral songs have to be sad and morose. Such is the case with Jaci Velasquez’s 1996 track We Will Overcome, featured on her album “Heavenly Place.”

This song is happy and hopeful at its core; a little upbeat but not too much. We Will Overcome shines a light on the hope that we have in the Lord. We can have faith in knowing that we will one day finally overcome the heartache of this life and enter the joy of the next.

Some would say that this song is the most uplifting of all the songs to make it to our list!

Louis Armstrong recorded What a Wonderful World in 1967. Ever since then, it’s been reminding people of all ages that life is beautiful and always finds a way to go on…even in the midst of loss.

Last on our list of most uplifting funeral songs (but certainly not least) is Josh Groban’s You Raise Me Up. Featured on his second studio album, “Closer,” this song emphasizes the higher power of the Lord, whom we can always rely on for strength when we need it the most.

The song’s comforting lyrics, and Groban’s powerful vocals, make You Raise Me Up a very popular choice for funeral and memorial services.

European duo Secret Garden originally wrote this song in 2002. While it was a big hit, Groban covered it just one year later with an even bigger hit that has stood the test of time.

That’s it for our list of the 21 most uplifting funeral songs. We hope that you were able to find some inspiration while browsing through these songs. No matter which tracks you end up choosing to play at the funeral for your loved one, we hope that they bring you and your family a sense of peace as you say goodbye to your loved one.